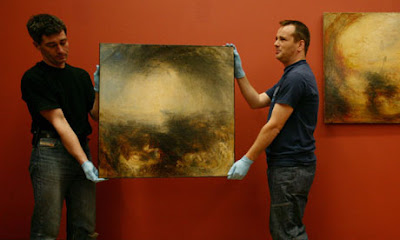 The stolen Turners, the Serbian underworld, and a £24m insurance job

The Tate's extraordinary coup in securing both a massive payout and the return of the masterpieces can be told at last. Matthew Bell investigates

The tale has all the ingredients of a Dan Brown thriller: a theft of two Turner masterpieces, a £24m insurance fund and dealings with the Serbian underworld. Now the story of the Tate's cloak-and-dagger operation to recover Shade and Darkness and Light and Colour – stolen to order by a Serbian gang while on loan in Frankfurt in 1994 – has been told by Sandy Nairne, then director of programmes at the Tate. He is now director of the National Portrait Gallery.

His book, Art Theft and the Case of the Stolen Turners, is not published until next month, but has already raised eyebrows in the art world, thanks to its "remarkably frank" account of the lengths the Tate was prepared to go to for the safe return of the paintings. Mr Nairne reveals that one of the pictures was recovered in July 2000, but the Tate resolved not to tell the public until the second had been returned. When, four months later, a journalist from The Mail on Sunday got wind of this, the Tate's director Sir Nicholas Serota drafted a press release that said: "I remain hopeful that one day the paintings may return to the Tate", even though one picture was already back in a secure unit. Shade and Darkness had been secretly repatriated by Mr Nairne, who managed not to alert Customs, importing the precious work as just a "19th-century landscape".

The book also relates how Sir Nicholas and the then Paymaster General, Geoffrey Robinson, persuaded insurers to accept a deal in which the Tate received a £24m payout but then kept most of the money when the second painting was returned in December 2002. Insurer Robert Hiscox told The Independent on Sunday that it had been a "good deal for the country, but a terrible deal for us".

The unusual agreement was struck in June 1998, at an angry and noisy meeting between the Tate and insurers, arranged by Mr Robinson at the Treasury. When the paintings were stolen, the £24m insurance was put into a high-interest bank account that could not be touched. But in 1998, the Tate needed £20m to help to fund the creation of Tate Modern, and Mr Robinson suggested using the stolen Turners fund, which by now had grown to £26m with interest.

The idea was that the Tate would buy back title to the paintings from the insurers, so that if they were found, the gallery could keep them and not have to repay all the money. It would make three payments of £4m to the insurers, the last one to be made if the paintings had not reappeared by 28 July 1999. According to Mr Robinson in his memoirs, the final payment was never made, meaning that only £8m was repaid to the insurers. In what turned out to be a very fortunate turn of events for the Tate, the first painting was then recovered the following year, and the second two years later. After eight years, the Tate had both paintings back, plus £22m, which had been invested into Tate Modern.

Robert Hiscox, managing director of Hiscox Insurance, says the insurers were just unlucky. "I had a conflict in that I love art and I love the Tate and wanted to do a deal to help the Tate," he said. "We knew who had the paintings, but we thought they would be in rotten condition by now, four years after they were stolen. So I thought it would be better to get some money back and help the Tate out at the same time. My difficulty was persuading my fellow underwriters to do the deal. But by the time the pictures turned up, the deal had been done, and of course we couldn't go back on it."

There is no suggestion the Tate knew it would get the pictures back so soon after arranging the deal with the insurers. By then it had spent £3.5m on expenses and information leading to their recovery.

Michael Daly, the director of Art Watch UK, calls the book an "electrifying glimpse into the workings of the Tate's controversial management culture". He claims the misleading statement was drafted to put journalists off the scent, and that Sir Nicholas wanted to wait for the second painting to be recovered so that he could release a "genuinely good news story".

Questions have also been raised over Mr Nairne's motive for writing the book. He was not appointed head of Tate Modern in 2002, despite his apparently close working relationship with Sir Nicholas. He left that year to become head of the National Portrait Gallery, where he remains. A spokesman for Mr Nairne says: "After eight years of not being able to talk about the operation to recover the Turners, Sandy just really wanted to get it off his chest."

Sir Nicholas's office denied that he lied to journalists, adding that the draft statement was never issued to the press. But Mr Nairne writes in his book that The Mail on Sunday did not run its story after the statement was drafted, saying, "My fears about further investigative pieces... receded."

A spokesman for Sir Nicholas said: "Tate worked closely with the Metropolitan Police on every stage of the recovery of the Turner paintings and we were advised that we should not confirm anything that might put the investigation in jeopardy. At the time this statement was drafted the recovery was at a critical stage, which is why the wording in this draft was deliberately obscure. As with all press statements it would have been reviewed and revised in response to specific questions received from a journalist."

In 1994, two paintings by Turner were stolen from the Schirn Kunsthalle in Frankfurt while on loan from the Tate in London. Ecstatic visions of light and burning darkness, they were valued at £24m. There were the usual rumours of Balkan gangsters stealing them for collateral or for some zillionaire client who wished to gaze upon them for the rest of his days. They were lost – or so it seemed – for eight years.

In that time, nobody at the Tate worked harder to recover them than Sandy Nairne, then its director of programmes, now well-respected director of the National Portrait Gallery. A stupefying amount of Nairne's life, as his riveting book reveals, was devoted to nerve-racking negotiations with mysterious middlemen, sudden and futile expeditions to Germany, tense meetings with loss adjusters, Tate trustees and detectives.

He is woken by midnight calls, embroiled in Ealing comedy escapades with fraudsters, entangled in operations so complex he has to draw diagrams to keep track of everyone involved, from the petty thieves who won't name their bosses to the flamboyant German lawyer Edgar Liebrucks, who eventually secures the handover to Geoffrey Robinson, the paymaster general, who contributes a big twist to the plot.

When his colleagues tease him for "wandering in the woods again" after another fruitless trip, one wonders whether anyone else was ever quite as eager to find the Lost Turners (two of 3,000 owned by the Tate). But Nairne, who deeply disapproves of the romantic narrative of art theft, with its Thomas Crowns and reclusive collectors lusting over their stolen Vermeers, is driven by a moral compunction to put publicly owned art back before the public.

The book wants to be – has every claim to be – a meticulously historical account, seamed through with serious ethical considerations. Yet it is split. The second half is a scholarly survey of theft, markets and value that appears deliberately designed to dampen the excitement of the first but does nothing to diminish the mounting drama in which Nairne can't help becoming his own protagonist.

He becomes dejected, nearly misses job interviews (Tate Modern opens, a directorship he doesn't get), frets about detectives chasing paintings instead of terrorists. His daughter complains that he is not sympathetic about her sore throat at a most precarious moment in the operation. When "Rocky" Rokoszynski, the charismatic investigator, calls with crucial instructions, Nairne is taking part in a sports event with his son. He feels terribly torn about both.

Hopes soar – a Polaroid of the stolen art arrives: "I wanted to shout out that the paintings were alive!" – and recurrently fade. The Metropolitan Police (page 69, for anyone collecting further instances of Met incompetence) almost derails the operation. Eventually, the first painting is recovered, though the Tate puts out a press release denying that fact when the Daily Mail publishes rumours that the Serbian warlord Arkan is involved. It is another two years before the second comes home.

Meanwhile, in the intervening years, Robinson comes up with a cunning scheme. The Kunsthalle was insured; the Tate had received £24m; why not buy the titles back from the insurers for less (£8m in fact)? If the pictures ever turned up, the Tate might have them back and make an extra £16m into the bargain.

Which is precisely what happened, though Nairne is too honourable to gloat. Instead, he records every meeting with the Charity Commission, the Department for Culture, Media and Sport and the high court to ratify the legality of using that money to pay for the Tate's new warehouse, as opposed to Tate Modern itself. Robinson is reproved for confusing the two buildings in his memoirs.

But warehouse, museum: who cares? Nairne is too concerned with this issue. Nobody reading Art Theft could fail to wonder about something far more important: namely, what kind of transaction was involved in getting the art back?

In all those trips to Frankfurt, the author barely gets an overnight stay. His parsimony is civic-minded. The expenses for recovering the pictures stood at £3.5m in the end and he's absolutely scrupulous about public money.

But he is too scrupulous, alas, to mention Stevo V, the Balkan mafioso rumoured to have masterminded the theft. Or the fact that Liebrucks was Stevo's lawyer, which might explain how he helped find the Turners. Indeed, you will read nothing here about why they were stolen, where they were kept or by whom (Josef Stohl, the Dean Martin impersonator said to have looked after them, is a piquant omission). These are the romantic speculations that give people what Nairne disparagingly calls "a buzz".

Art theft is commonly described as a victimless crime: nobody hurt. Presumably, the insurers who lost so heavily by selling the titles would not agree, though underwriting is betting by other means. The recovery of both the pictures and the insurance money was, by comparison, a smart gamble for the Tate.

But was it ransom, pay-off or buy-back? Nairne is insistent that it was nothing more than a reward for information; certainly, the Tate had no direct contact with the criminals. But someone other than Liebrucks and the redoubtable detectives "Rocky" Rokoszynski and Mick Lawrence received some of those millions and lo, the pictures were returned. The greater mystery of Art Theft is not who stole the Turners, but what exactly became of the Tate's money.
Posted by Art Hostage at 4:53 pm