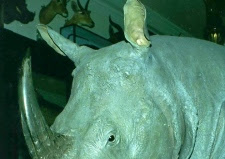 POLICE were today hunting a gang of thieves who broke into Ipswich Museum overnight and stole the horn from the iconic exhibit Rosie the Rhino.

It follows a number of similar thefts from other museums in Europe – and the thieves also stole another rhino skull.

Rhino horn is widely prized in Chinese medicine for its alleged aphrodisiac qualities – and the value of it is said to be twice that of gold.

The museum opened late today once police had finished their investigations – but it was revealed that the horn would be useless as an aphrodisiac.

Peter Berridge, from the museum management team, said it dated from the Victorian era and that a cocktail of chemicals would have been used to preserve it.

He said: “We don’t know for certain what was used, but it may well have included large amounts of arsenic.

“The alleged powers of rhino horn are completely mythical and this one is likely to do much more harm than good to anyone who tries taking it!”

Council director with responsibility for culture Jonathan Owen said the museum’s security had been kept under review because officials had been aware of other similar thefts.

Museums in Florence, Brussels, and Liege in Belgium had been targeted in recent months.

But Mr Owen said the Ipswich Museum was regarded as secure: “We had an inspection by the museums watchdog fairly recently and we passed with flying colours.”

The raiders entered by breaking through a door at the back and spent only four or five minutes in the building before making off with the horn and skull. Nothing else was taken or damaged.

Councillor with responsibility for leisure and culture Bryony Rudkin said the loss would cause a great deal of sadness across the town.

She said: “People love this museum and its exhibits. The rhino especially – back in the 1960s there was a competition to name it and it became Rosie the Rhino.

“We were determined to get the museum open as soon as we could, so as soon as the police had finished we opened the doors and there was quite a crowd outside.”

She said that whatever happens Rosie would have a new horn back before long.