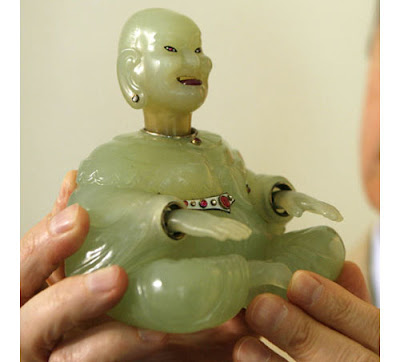 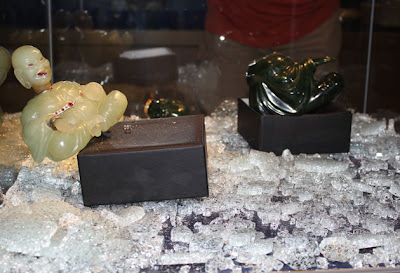 Priceless buddha that sailed with Onassis is broken in museum case

The Onassis Buddha, a priceless Fabergé statue, survived for years on a Greek tycoon's yacht until it was bought in 2008 by a Russian billionaire art collector. One would have thought a hermetically sealed glass case in a new museum would be enough to protect it, but the treasure has suffered unforeseen damage in a freak accident after its display case shattered in "mysterious circumstances", leading to detachment of one of the statue's hands – and an irate owner.

Alexander Ivanov, 49, made his fortune importing televisions to Russia, and now owns the world's largest Fabergé jewellery collection worth an estimated £1.2bn. He received news last weekend that his Fabergé buddha had broken after a fall while in an apparently secure case.

The statue, once owned by the Greek shipping magnate Aristotle Onassis and bought at auction in London for £1.6m, is on display at Mr Ivanov's Fabergé Museum in Baden-Baden, Germany. The case contained another Fabergé buddha, which was also damaged.

"It is extraordinary," said Mr Ivanov. "We are looking into why this happened. They are popular, important exhibits and we will investigate our other glass to make sure this does not happen again".

The museum director, Sergei Avtonoshkin, said the glass was made by a "prominent German museum case glass manufacturer" which he refused to name until the investigation was complete. Mr Avtonoshkin said he would seek compensation from the company, before deciding whether to pursue further action.

The two items fell when the glass panel supporting them collapsed. According Mr Avtonoshkin, the panel is able to hold up to 16kg (35lb), and the two statues had a combined weight of 2.5kg. The incident had occured at night, making it difficult to study CCTV footage. He ruled out any attempt at theft, and said no intruder had breached the museum space, suggesting a manufacturing defect.

After the fall, a dark green buddha statue's head became unhinged and one of the Onassis Buddha's hands came loose. Museum officials said the statues had been reassembled but confirmed there had been permanent damage. Mr Avtonoshkin refused to speculate on how the tumble would affect their value.

Mr Ivanov – who bought a Fabergé egg in 2007 for £9m, a world record at the time – spends tens of millions of pounds each year on such objects. He bought the Onassis Buddha, made of the semi-precious stone Bowenite, at Christie's, London, the following year, along with a £3.6m diamond necklace once owned by Christina Onassis, Aristotle's daughter. His Fabergé collection contains at least 3,000 items. Last year, he opened the museum, the first Russian-funded museum to open in the West, to house part of his collection. He funds his huge appetite for collecting by working as a high-end art dealer for the Russian elite.

"There's always a queue of people who want to buy things from me," he told The Independent in December. "If I've bought it, people know it's worth something."

The jewel-studded Onassis Buddha was once displayed on Onassis's yacht, Christina – named after his daughter – and was reportedly one of the magnate's prized possessions because its finely balanced hands, head and ruby tongue moved constantly with the yacht's ebbs and flows.