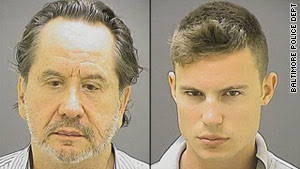 At the Maryland Historical Society, they're calling it the Great Cupcake Caper.

Before being arrested by police on Saturday and charged with stealing dozens of historical documents, author and collector Barry H. Landau had brought cupcakes for the center's employees. They figure he was trying to ingratiate himself with the staff, much as he has for decades with political and Hollywood elite.

And it may be a calling card of sorts. As the investigation into the thefts continued to broaden Tuesday, officials at another state historical society said they had been visited multiple times in the past by Landau and his alleged conspirator, who brought Pepperidge Farm cookies for the staff and aroused suspicions with their "odd" behavior.

Word of the arrests has set off a ripple effect among the historic preservation community, with the FBI requesting that other museums and libraries review their logs to see if Landau and 26-year-old Jason Savedoff had been visitors.

Landau is a renowned collector, reputed to have the largest collection of presidential memorabilia outside of museums and the presidential libraries. The former White House protocol officer has claimed to have 1 million artifacts in his Manhattan apartment on West 57th Street.

The director of the Maryland Historical Society confirmed that the pair had previously visited its Baltimore library in June, and authorities were working to account for documents that were checked out during that visit.

The incident has sparked renewed attention to securing priceless and historic artifacts at museums and libraries.

"In historic preservation circles, it's a problem that they've been trying to deal with for some time, and these situations bring it right to the forefront," said Joseph M. Coale, the former president of Historic Annapolis, who served on the board of the Maryland Historic Trust for 25 years. "Maryland has an interesting and unique history that's given great credibility by a lot of these documents" apparently targeted for robbery. "As a Marylander, I'm rather incensed about it."

Authorities declined to discuss the next steps in the investigation, but agents from the National Archives were observed leaving the Maryland Historical Society's Monument Street location around lunchtime Tuesday, boxes under their arms, as an FBI agent with a gun on his hip reviewed documents in the library where the crimes are alleged to have occurred.

"We're trying to determine how widespread this might be," said Richard Wolf, a spokesman for the FBI in Baltimore.

Landau and Savedoff, charged with one count of theft over $100,000, were initially held on $1.5 million bond, but a judge revised that to no bond at a hearing Monday, which Landau's attorney, former federal prosecutor Andrew C. White, called "outrageous."

"Mr. Landau is one of our nation's most well-respected presidential historians, and I think it's outrageous that he's being held without any bond in a property theft case in which none of the allegedly stolen property ever made it out of the historical society," White said. "Clearly, there's a breakdown in the judicial process."

White said he was filing a habeas corpus petition in Baltimore Circuit Court to obtain bail for Landau.

In Philadelphia, Lee Arnold, senior director of the library and collections at the Historical Society of Pennsylvania, said Landau and Savedoff — using the name "Jason James" — had visited more than a dozen times since December, identifying themselves as uncle and nephew. Landau, according to his website, is working on his second book.

Landau introduced himself as a scholar and donated a copy of his first book to the society, and each time he came bearing cookies. But when officials tried to write him a thank-you note, it was sent back as undeliverable. An email address Savedoff gave also appeared to be invalid. Staff became suspicious and called a meeting, and planned to check their driver's licenses upon the next visit.

Of Landau, Arnold said: "He certainly was very personable. He had class. He knew how to conduct himself in a research library." But Savedoff, of whom little is known, was "rough around the edges" and "repeatedly asked naive questions," he said.

"He never understood what we were saying," Arnold said.

Staff members were reviewing footage from surveillance cameras to see if there is any evidence of theft. Kim Sajet, the Pennsylvania society's president and CEO, said they are filling out a report for the FBI.

The FBI issued a request for information, saying that Landau and Savedoff may have used "their true names or permutations thereof." History buffs were trying to get the word out more organically as well — Jennifer Ferretti, the digitization coordinator for the MHS, put out a message on Twitter saying "Please alert all archives (esp. on the East Coast) about Barry Landau! He visited more places than just MdHS."

Meanwhile, Landau's past continued to raise questions. WJZ-TV confirmed that Landau, who shares a name with a retired producer for CBS' "60 Minutes," had attended auctions and collectible shows by showing a media credential for the national network, which issued a cease-and-desist letter to him after it found out.

Rex Stark, a dealer, collector and recognized authority on Americana, said he had known Landau for 20 years and said he has the "premier" collection of presidential inaugural tickets, invitations, menus and programs. He said Landau often name-dropped his various connections, so much so that Stark said he got "tired of listening to it a lot of the time."

Stark said that he was not aware of Landau ever acting as a dealer, though he said he contacted him two months ago and said that he was "interested in selling things," and had mentioned rare and expensive autographs of Beethoven and Marie Antoinette.

"We follow what goes on in the industry, in this world," Paul Brachfeld, the inspector general for the National Archives, said on Monday before his agency became involved in the investigation. "If they do it one place, they may very well do it in another."

Brachfeld declined to comment Tuesday on the steps his agency was taking or why it had become involved.

At the Maryland Historical Society, President Burt Kummerow gave a reporter a tour of a new exhibit set to open soon that shows off War of 1812 artifacts and paintings by Charles Willson Peale, among other items. The museum, located two blocks west of Baltimore's Washington Monument, mixes historically significant items with modern architecture and has the largest collection of Maryland history in the world.

Kummerow said records show that Landau and Savedoff had visited the historical society in June. He would not comment on whether other items were missing. "We're checking that out," he said.

Though Kummerow said the society has been growing, it remains short on funds and staff. That puts it in a potentially vulnerable position as it allows access to its collection of 7 million documents contained within its library.

Coale, the former board member for the Maryland Historic Trust, said he doesn't believe archives will be able to continue to allow access to original documents. "They don't have the staff to do it, especially nowadays with societies more or less operating with skeleton crews," he said.

But Kummerow says his staff is also not in a financial position to digitize its archives or provide photocopies of the volumes of material researchers may want to see.

Kummerow is reassured, however, that the alleged weekend theft was detected by staff members, who called the police officers who reported finding five dozen documents that had been checked out by Landau and tucked into a laptop case inside a locker belonging to Savedoff.

"The library really did its job," Kummerow said.

Federal authorities searched the Manhattan apartment Wednesday of a collector and author charged with stealing documents from the Maryland Historical Society, according to a source familiar with the investigation.

Barry H. Landau, 63, and another man continue to sit in the Baltimore City Detention Center, held on no bond. Landau's attorney formally filed a petition for a bail hearing in Baltimore Circuit Court and is awaiting a date.

Landau and 24-year-old Jason Savedoff were arrested Saturday at the Maryland Historical Society after police say the pair tried to steal documents, including one signed by Abraham Lincoln. Baltimore police charged each with one count of theft over $100,000.

Not all of the 60 documents recovered belonged to the historical society, the source said, and investigators were working to determine to whom they belonged. Agents from the FBI and the National Archives were observed this week by a Baltimore Sun reporter at the historical society's Monument Street office.

Late Wednesday Landau's law firm warned against a rush to judgment. "No documents were in Mr. Landau's possession, concealed on his person or in his belongings," said Steven D. Silverman, Landau's attorney, in a statement. "A man of his stature is entitled to due process before a rush to judgment. There is no evidence."

Landau, who lives two blocks south of New York's Central Park on West 57th Street, is said to have the largest private collection of presidential inaugural memorabilia outside of museums of the presidential archives. He was a former White House protocol officer and has connections to New York, Washington and the Hollywood elite.

Asked to confirm whether an apartment was searched at the Hemisphere House, the name of Landau's building, a woman in the management office said they were "not giving any interviews on the subject."

Baltimore FBI spokesman Richard Wolf would not confirm information about the investigation or whether Landau's apartment was searched. "We're taking all the logical steps that we would in a case like this," Wolf said.

Earlier this week, the FBI alerted museums, small libraries and historical societies throughout the region to check whether the pair might have committed similar thefts. On Tuesday, the Historical Society of Pennsylvania confirmed that Landau and Savedoff, who used an alias, had visited more than a dozen times and aroused suspicions with "odd" behavior.

Lee Arnold, senior director of the library and collections at the Historical Society of Pennsylvania, said that he and his staff were reviewing numerous "call slips" filled out by Landau and Savedoff during more than a dozen visits to the Philadelphia institution since December.

"We keep those slips forever, and we're looking at those dates to see if anything is amiss," he said.

Such slips must be filled out by anyone seeking to examine the society's archived materials. Arnold said it was impossible to say yet whether anything might be missing, because the manuscript and document folders typically contain many items that are not cataloged individually.