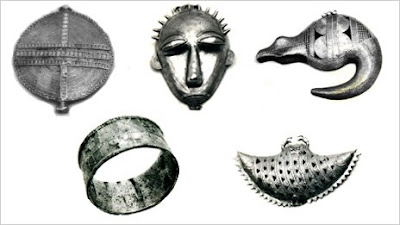 The thefts from the country's main museum took place during the recent battle for Abidjan between forces loyal to current President Alassane Ouattara and the former leader Laurent Gbagbo.

"For a country like Ivory Coast which at the moment really needs to reaffirm its identity, to rediscover its own values, it's really a tragic loss", museum director Sylvie Memel Kassi told the BBC.

"With this theft, we fear that a part of the history of Ivory Coast will be erased."

Around 80 objects were stolen including royal gold jewellery, masks, sculptures and traditional religious artefacts, some dating back to at least the 17th Century.

The leading curator at the Museum of Civilisations, Djowa Zoko, showed me around the now closed museum, which was also hit by mortar shells.

"In general we had the royal items here: Everything that's gold - the gold pendants, gold necklaces, gold bracelets, fly whisk that had handles covered with gold and swords - again with the handles covered in gold," he told me.

On the side of the room, in between a wooden canoe, colonial photos and a giant elephant skull, delicate bronze pendants and necklaces remain, but their gold equivalents have all been taken.

"Those who came were specialists because they knew exactly what was the most essential," Mr Zoko said.

Mrs Kassi believes the thieves had the help of someone on the inside.

"The doors weren't forced open and seeing the way the objects were taken without breaking the glass… these were specialists who knew what they were doing," she said.

An inquiry is now under way and museums around the world have been alerted.

Prior to colonisation in 1893, Ivory Coast was home to several flourishing kingdoms, including the Abron of Gyaaman, the Muslim Kong Empire, and a Baoule state and the Anyi kingdoms of Indenie and Sanwi.

In addition to the stolen artefacts, the museum was also hit by the theft of computer equipment and damage to the buildings.

The main museum building was built by the French in colonial times and is just a few metres from the entrance to one of the country's main military bases and the army headquarters.

It is in the central commercial district, Plateau, which was one of the last to fall into the hands of the pro-Ouattara forces as they pushed through the city in April to drive Mr Gbagbo from power.

He had refused to handover to Mr Ouattara despite losing a long-delayed presidential election in November last year.

"[The fighting in] this area was particularly intense, but up until then we thought that by being next to a military base gave us a good deal of security," Mr Zoko said.

"But it turned out to be completely the opposite because this place turned into a battlefield."

The Museum of Civilisations of Ivory Coast has a vocation to promote Ivorian cultural history and its staff are still compiling a detailed list of all the objects that were stolen.

But already an initial list has been entered into the Interpol database.

"I know I can count on international solidarity," Mrs Kassi said.

"There are international organisations that look after museums that with other networks try to find stolen objects."

She is hopeful that now the looted objects are on the Interpol database the thieves will not be able to sell them or if they do they will be caught and the treasures returned home.