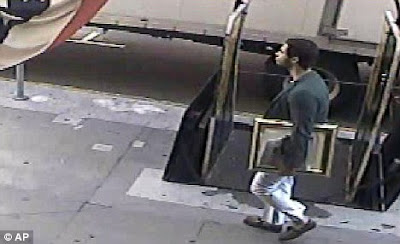 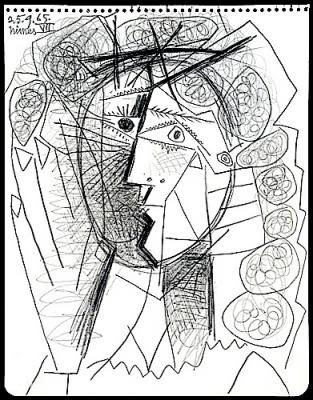 Drawing Worth £100,000 taken in broad daylight from gallery

Here is the first photo of the valuable drawing, by 20th century master, Pablo Picasso which was stolen this morning from a gallery in San Francisco. A man in dark glasses was seen walking into a gallery near Union Square at 11:40. He wandered suspiciously around the upmarket gallery before ripping a drawing from the wall and walking out with it, hailing a cab and disappearing into traffic. Witnesses described the thief as a white man about 6 feet tall, age 30 to 35, wearing a dark jacket, a white shirt, dark pants, large dark glasses and loafers with no socks.

The Picasso is worth at least a hundred thousand "We're hoping someone in the public might recognize this piece, if they see someone walking around with it or trying to sell it," said Officer Albie Esparza, a police spokesman. "We don't know if the place was targeted or whether this was a random opportunity that this guy took advantage of." The 1965 pencil drawing, "Tete de Femme," is "an original and unique piece," said a gallery spokeswoman who declined to be identified. "It's a pencil on paper, one of a kind original Picasso." The Pencil on paper is 10 5/8 x 8 1/4 inches and was executed in 1965 Title Tete de Femme.

Picasso was born October 25, 1881, Málaga, Spain and died April 8, 1973, Mougins, France. He was a Spanish expatriate painter, sculptor, printmaker, ceramicist, and stage designer, one of the greatest and most influential artists of the 20th century and the creator (with Georges Braque and Juan Gris) of Cubism.

The enormous body of Picasso's work remains, his legacy a tribute to the vitality of the “disquieting” Spaniard with the “sombre piercing” eyes who superstitiously believed that work would keep him alive. For nearly 80 of his 91 years Picasso devoted himself to an artistic production that contributed significantly to and paralleled the whole development of modern art in the 20th century.

A suspect has been arrested in connection with the theft of a Pablo Picasso drawing from a Union Square art gallery, San Francisco police said today.

Police did not immediately release the suspect's name or say whether they had recovered the artwork, which the gallery was selling for more than $200,000. The gallery says the piece was a 1965 pencil-on-paper drawing titled "Tete de Femme," recently purchased at an auction for $122,500. They plan to release more information at a news conference scheduled for 10 a.m.

A short time later, a restaurant's surveillance camera filmed a man walking along Geary with a framed artwork covered by a newspaper. The video can be seen at www.sfgate.com/ZLAQ.

Police said the thief got away by hopping into a cab.