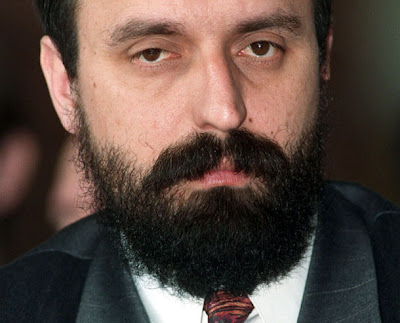 BELGRADE, July 20 (Reuters) - Desperate for cash after years on the run, Goran Hadzic tried to sell a stolen painting believed to be a Modigliani and supplied the vital clue for capturing the last major Yugoslav war crimes fugitive.

Serbia's president announced the arrest of Hadzic, a Croatian Serb wartime leader indicted for crimes against humanity during the 1991-95 Croatian war, on Wednesday.

In a later news conference, Serbia's chief war crimes prosecutor Vladimir Vukcevic said the 52-year-old was arrested in a forest near the village of Krusedol after investigators followed the trail of a painting attributed to Amedeo Modigliani, the Italian 20th century figurative artist.

"The breakthrough was information that he (Hadzic) wanted to sell a stolen Modigliani painting as he was running out of money," Vukcevic told a news conference.

Earlier this year Serbian tabloids reported that the painting, allegedly titled "Portrait of a Man," had been discovered in the home of a friend of Hadzic.

"We have worked with the Serbian authorities before and we are currently working with them on a number of cases," he said in an interview.

Marinello said Modigliani paintings had sold for between $4 million and $10 million recently, but the seller of a stolen painting might get just 5-10 percent of its value if it was traded on the black market.

There is also a fair chance that the painting, which was apparently exhibited in Belgrade in the mid-2000s, was a fake, said a law enforcement agent who had investigated stolen art works.

"We had suspicions about that particular painting because it was part of a large number of fakes sold to a collector," said the investigator, who did not want to be named.

He said the Serbian market for stolen art was at its height during the late 1980s and early '90s -- a period in which Yugoslavia collapsed and war broke out -- before it subsided after 2000.

Marinello said there are many cases involving stolen art in Eastern Europe and the former Soviet Union as enforcement is not always robust and corruption widespread.

"Recovering stolen art in that part of the world is extremely difficult," he said.
Posted by Art Hostage at 4:10 pm