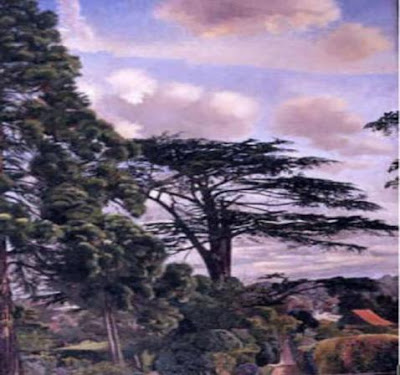 The artwork, entitled Cookham from Englefield, was taken from the Stanley Spencer Gallery in Cookham High Street.

The theft happened just before 1am yesterday morning, police revealed this afternoon.

Both the gallery and the private owner who had loaned it are devastated, police said.

The oil on canvas painting, created in 1948, was taken after a window was smashed at the gallery.

Police were alerted by a member of the public.

Investigating officer Det Con Iain Watkinson, of Force CID in Maidenhead, said: “The painting is very distinctive and it holds a great deal of sentimental value to the owners. The owners and the gallery are both devastated by its loss.

“I would like to speak to anyone who saw any suspicious vehicles in the area, or a person or people acting suspiciously, around the time of the burglary.

“I would also urge people working in the art industry to be vigilant and be aware this painting has been stolen.”

Last year the auction record for a painting by Sir Stanley Spencer was broken twice within minutes at Sotheby's in London.

Workmen in the House, which had an upper estimate of £2m, sold for £4.7m before Sunflower and Dog Worship, with a top estimate of £1.5m, fetched £5.4m.

Sir Stanley, described by the auction house as one of the 20th Century's most important UK artists, was born in 1891 and lived and worked in the Berkshire village of Cookham, now home to the gallery of his work.