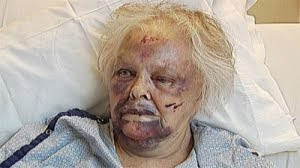 Evanston police are investigating a reported home invasion in which three men allegedly forced their way into a north Evanston home, pushed a man and a woman to the floor, duct taped the couple and stole four pieces of artwork valued between $100,000 and $200,000.

Police responded to a home invasion call in the 2200 block of Central Avenue at 8:55 a.m Friday. According to the report, a 67-year-old man and his 67-year-old wife were approached by three males who stated they had a delivery for the man. The three men reportedly forcibly entered the home by kicking the man to the floor. Once inside, the men also knocked the woman to the floor and proceeded to duct taped the hands of both victims.

The three men reportedly took four pieces of artwork: a 1950s oil painting, a print of a crucifixion and two other prints. The oil painting and crucifixion print were each valued between $50,000 and $100,000, according to the victims, while the remaining two prints were not of significant value.

After the three offenders left, the victims were able to free themselves and call police. The couple was taken to a local hospital soon after.

Police described all three offenders as either white or Hispanic men. One is described as wearing dark clothing, possibly a black shirt and pants. Another was described as having a stocky build and wearing a red and white shirt with black pants. No description was given for the third offender. Police reported that the three offenders might have been driving a small, white box-style truck, possibly rented from Budget car rental.

Evanston detectives are investigating the incident and attempting to identify the artist of the stolen painting and prints. No photos of the artwork are currently available.

Anyone with information regarding this incident can call the Evanston Police Department at 847-866-5000, call the detective bureau at 847-866-5040 or contact police by texting “CRIMES” (274637) and then typing EPDTIP in the message line followed by your information on the incident. All texting tips are anonymous.

This is NOT the victim!