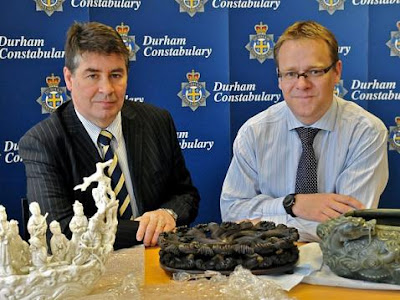 
A PAIR of Chinese antiques stolen in a museum burglary do not appear to have been damaged, police revealed this morning.

The 18th Century artefacts, valued at more than £2m, were stolen from the Oriental Museum in Durham City on April 5 after intruders chiselled through a wall.

Police this morning revealed that the jade bowl and porcelain figurine had been found concealed in a field in the Brandon area, just a few miles from the museum.

Both pieces were examined by an expert from the museum on Monday afternoon who confirmed they were in excellent condition, with no apparent damage resulting from their removal from the museum.

Four men and one woman, all from the Walsall area of the West Midlands have been arrested, interviewed and released on police bail until early June pending further enquiries.

Police have confirmed one of those arrested, 35-year-old Lee Wildman remains at large and they would like to trace him and speak to him again.

They also want to trace 32-year-old Adrian Stanton, an associate of Mr Wildman who is also from Walsall.

Officers this morning also revealed they had found two cars they wanted to trace in connection with the inquiry, an orange Renault Megane and a blue BMW 330 Coupe.

However, they are continuing the hunt for a blue Audi S3 seen in the Durham City area at the time of the break-in.

Detective Superindent Adrian Green, the officer leading the investigation, said the cars were found at separate locations in the West Midlands and both have been subjected to forensic analysis.

He added: “The bowl and figurine were recovered as a direct result of the police investigation, which is still very much ongoing.

“We have a number of active lines of enquiry, one of which concerns the Audi car which was in the Brandon and Meadowfield areas during the days leading up to the burglary.”