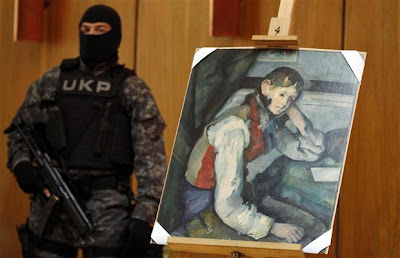 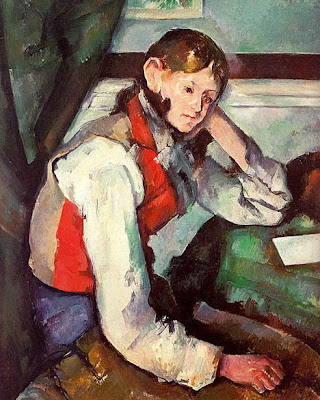 Swiss prosecutors say a painting seized in Serbia has been confirmed as a stolen masterpiece by French impressionist Paul Cézanne.

BELGRADE/ZURICH — Police in Serbia have recovered a painting by the French artist Paul Cezanne that was stolen at gunpoint from a Swiss museum four years ago, officials said on Thursday.

Cezanne's Boy in a Red Waistcoat, which media said was worth more than $100 million, was one of four paintings stolen from the E. G. Buehrle Collection in Zurich in 2008 by a trio of masked robbers who burst in just before closing time and told staff to lie on the floor while they took what they wanted.

The heist was one of the largest in the world at the time.

Four men were arrested in the capital Belgrade and the southwestern town of Cacak on Wednesday in connection with the theft and the suspects were identified asIvan Pekovic , the alleged organizer of the theft and his accomplices in Serbia, Rasko Mladenovic Goran Radojevic and Bobe Nedeljkovski, all of them already known to the police, Radisavljevic said.

The director of the Buehrle collection confirmed the authenticity of the painting, the Zurich state prosecutor's office said.

At a press conference in Belgrade, Miljko Radisavljevic, the special prosecutor for organized crime, said the suspects wanted to sell the painting, found in the door panel of a car, for as little as 3.5 million euros.

"They received 2.8 million euros before the arrest," he said.

Boy in a Red Waistcoat, thought to have been painted in 1888, depicts a boy in traditional Italian dress wearing a red waistcoat, a blue handkerchief and a blue belt. Three other versions of the painting are in museums in the United States.

Two of the stolen canvasses, one by Claude Monet and the other by Vincent Van Gogh, were recovered not long after the robbery, abandoned in a car. About a year later, Degas’ 'Ludovic Lepic and his Daughter', worth about £6.9 million was returned to the Swiss museum after a 400,000 euro reward was paid to and unidentified person, Serbian officials said..

‘A year after the robbery Serbian police managed to tracks Ivan Pekovic down. We knew that he was one of the leaders of the ‘Pink Panther’. As per request by the Austrian police that wanted Pekovic for robbery of a jewelry shop when the owner was hit in the head. Serbian police raided his flat at Zvezdara. The police found almost a hundred peaces of watches and unique jewelry, each peace worth at least EUR 10,000. All of the objects were photographed and sent to foreign police services. Soon inquiries were started coming from Austria, Switzerland and Germany where robberies were carried out.

At the same time the police learned that Pekovic organized robbery of paintings at the museum in Zurich’, ‘Blic’ source from Serbia Home Ministry says.

"I don't think we have ever had a more valuable arrest," Dacic said. "The painting will now be guarded by police and returned to its owner."

The Buehrle collection, one of the most important 20th-century private holdings of European art, was amassed by the industrialist Emil Georg Buehrle, who derived his wealth from producing and selling anti-aircraft guns.

He was arrested and a fourth robber Cézanne, the weapons and 1.6 million

Picture Paul Cézanne, "Boy in a red vest" worth 100 million euros, which was stolen by three Serbian nationals were found last night in Belgrade SBPOK spectacular action and prosecution of organized crime. The leader of this group is Ivan Peković from Belgrade, for which they are involved in the pursuit noćašnjoj Special "interceptors" traffic police. As the exclusive 'Blic' learns, was arrested and a fourth gang member, was arrested at a found 1.6 million firearms.

Besides Pekovića, in the same action are still arrested two of his accomplices in Belgrade and Cacak.

- Peković is located near the stadium, and as he was driving very fast car in hot pursuit of njiim included interceptors. Chasing after him played along Ustanicka street to the hotel "Radmilovac" and then in the direction Lestane where he cut two interceptors at one time the parking lot when he was arrested. He was then taken to a room SBPOK the hearing - the source said, "Blic" from the Serbian Interior Ministry.

Names of those arrested will be announced at the press conference held by the Interior Minister Ivica Dacic, the special prosecutor Miljko Radisavljević.

Looking for pictures and thieves, our police collaborated with colleagues from several countries, and action itself was prepared several months.

Recall, "Flash" is still 2009th he wrote about two Serbian nationals who were suspected of the theft of the largest paintings in Europe - the robbery of four paintings of Vincent van Gogh, Claude Monet, Edgar Degas and Paul Cézanne (including the "boy in a red vest"), estimated at 112 million, which are in an armed attack in February 2008. was stolen from a museum in Zurich.

In a spectacular robbery of 10th February 2008. year, Emile Birlea collection in Zurich, three masked robbers half an hour before closing time entered the museum, forced staff to lie on the floor, and then enter the main exhibition hall on the ground floor and download the pictures off the wall.

It's been committing the largest fraud in Switzerland, and certainly in Europe. The thieves fled after stealing the direction of Colikon, southeast of Zurich. Museum staff, fortunately, was not injured - he said in the police spokesman Mario Cortez.

He said that the police arrived at the place of theft within minutes of leaving the thief and said that one of the thieves spoke German with a Slavic accent.

Discovery of the "boys in red vests" Paul Cezanne in Belgrade is the first large step in the investigation since then.

Belgrade police last year in a safe in Belgrade found the image of Spanish painter Pablo Picasso's "Head of horse" and "Glass and pitcher", whose value is estimated at about three million dollars , and that the sixth February 2008. was stolen from an exhibition in the Swiss towns Fefkonu

BELGRADE, Serbia (AP) — Serbian police say they have uncovered a painting believed to be by French impressionist Paul Cezanne, which was stolen from a private Swiss museum in 2008.

The Serbian police cooperated with their colleagues from several states and the operation was prepared for several months.

Police did not name the painting, but Serbian media says it is likely "The Boy in the Red Vest" stolen from E. G. Buhrle Collection in Zurich.

The painting was worth 100 million Swiss franks ($110 million) when it was stolen. Serbian police said Thursday three people were arrested overnight in connection with the robbery.

A police official, who could not be identified under standing rules, said that an art expert is being flown in from abroad to confirm the authenticity of the painting.

Last October, the Serbian police recovered two paintings by Pablo Picasso - Tête de Cheval (Horse's Head) and Verre et Pichet (Glass and Pitcher) - stolen in 2008 from a gallery in the Swiss town of Pfaeffikon, near Zurich.

The police official said law enforcement agencies from several countries had cooperated in the latest investigation that led to the apparent recovery of the Cezanne masterpiece.

The arguing has already started as to who gets paid how much. The actual amount used for the buy-back was 3 million Euros, so 1.5 million Euros has gone walkabout/AWOL already.

At this rate the recovered monies from old Crooner Ivan Peković will be just a couple of hundred Euros.

On a lighter note: "When asked how he could mastermind such a crime and then make such an obvious error, Ivan Peković replied, “Monsieur, that is the reason I stole the paintings. I had no Monet to buy Degas to make the Van Gogh."

Dramatic video of arrest and discovery of Cezanne below: