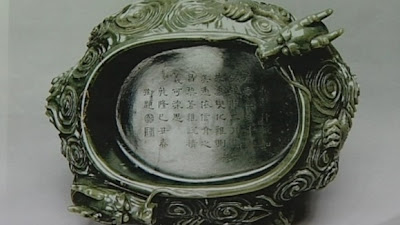 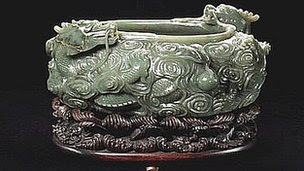 Arrests made after £2m museum raid

THREE arrests have been made by police after valuable Chinese artefacts worth an estimated £2m were stolen following an audacious raid on a North-East museum.

The exhibits were removed from display cabinets at Durham University's Oriental Museum late on Thursday.

A porcelain sculpture and large jade bowl dating from the Qing Dynasty were taken after intruders forced their way into the refurbished Malcolm MacDonald Gallery.

The university boasts one of the finest collections of Chinese antiquities in the UK.

There are fears they may now be spirited out of the country and auctioned off to wealthy collectors in China.

Last night Durham police said two men and a woman from the West Midlands area had been arrested and were being brought to a police station in the county for questioning.

None of the items have yet been recovered and police were still trying to trace other suspects.

Det Chief Insp Traci McNally said: “We are still trying to locate several outstanding suspects in relation to this investigation.

"We believe these individuals will be aware of the police investigation and we urge them to contact police without delay."

Dr Craig Barclay, the museum's curator, said: "We are extremely upset to have fallen victim to such a serious crime.

"The two pieces are highly significant in that they are fine examples of artefacts from the Qing Dynasty in the mediums of porcelain and hard stone.

"We very much hope that police will be able to recover them and we urge anybody who may have any information about their whereabouts to contact the police immediately."

An alarm was triggered at the museum, in the Elvet Hill area, at 10.40pm on Thursday and police arrived to find entry had been forced into the ground-floor gallery.

The jade bowl dated from 1769 and was part of the collection of Sir Charles Hardinge, a British collector of jades and hardstones. It has a Chinese poem written inside.

The thieves also took a Dehua porcelain sculpture with a cream-white glaze of seven fairies in a boat, which is 30cm in height and length.

They are from the Qing Dynasty, Chinas last imperial dynasty, which ran from 1644 to 1911.

Boya Wong, 29, who is from Guang Zhai in China, and studying for a PhD at Durham University, fears the record-breaking prices for items of cultural and archaeological significance in his home country may have motivated the theft.

He said: "Chinaware was made for the high-ranking officers and the emperors so chinaware in the museum is likely to be very elite.

"If the royal family ordered one vase they would make thousands and choose the best, then destroy the rest of them so these piece could be the only one on the world.

"That is why they are very valuable because they are unique.

"The collection here is small but is very high quality.

"If either of the stolen pieces is damaged, it would be a real shame because they are of high academic value as they are representing the work of a time period in history."

Detective Inspector Lyn Peart, of Durham City CID, said police wished to speak to anyone who was in the Elvet Hill area of the city, between 10pm and 11pm on Thursday, and may have seen anything suspicious.

The Oriental Museum is the only museum in the North devoted to the art and archaeology of the Orient, with collections of Chinese and Egyptian artefacts.

It will be closed over the bank holiday weekend and will not reopen until further notice.