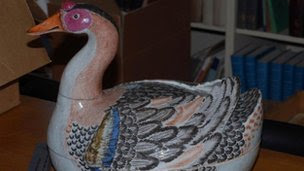 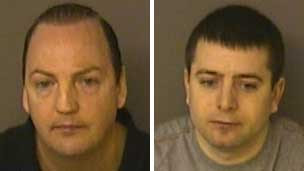 Police want to speak to two brothers in connection with more than 100 stolen antique books and objects offered for sale at an auction in Gloucestershire.

William Knowle Shannon, 30, and Andrew Shannon, 46, whose last known addresses were in Dublin, were arrested and questioned in relation to the thefts.

They were given bail and told to return to a Gloucestershire police station in July 2011, but failed to appear.

Among the items is a Chinese porcelain goose valued at around £20,000.

The books offered for sale in South Cerney date between 1571 and 1962.

A number of them contain personal inscriptions, including one to the wife of Sir Winston Churchill.

There is also a bronze sculpture by Clodion and a green hardback book of poetry, The Wild Harp by Katherine Tynan.

Inside is written: "To Lady Glenconner."

The books and ornaments are believed to have been stolen from stately homes or possibly National Trust properties across England, Scotland, Ireland and Wales.

A Gloucestershire police spokesman said officers have been working to try to locate the men and they are now asking the public for their help to find them.

A SERIAL thief who travelled from Ireland to target English stately homes has been jailed after a caretaker at Yorkshire's Castle Howard saw him stuff two valuable watercolours into his laptop bag.

Andrew Shannon, 44, described as unemployed and illiterate, robbed six stately homes of antiques and paintings worth thousands of pounds on a "weekend spree" of stealing.

Shannon travelled from Dublin to target famous buildings across the country, including Blenheim Palace and Chatsworth House.

Together with an accomplice, he stole ornamental lions, porcelain vases, figurines, expensive books and even an antique walking stick from Belvoir Castle – which was identified as missing by the Duke of Rutland.

The four-day spree came to an end on a Sunday last August at Castle Howard, when a caretaker spotted Shannon lurking on a second floor of the home where the public are not allowed.

He claimed he was looking for a toilet, but staff grew suspicious and found two 800 paintings hidden in his laptop bag.

He also had a walkie talkie which he used to communicate with his accomplice and a Chinese ceramic lid – the other half of which was with the other thief, who cannot be named for legal reasons.

Police later traced Shannon's car and found a satellite navigation unit which had been programmed with six stately homes across the UK.

In court he admitted his part in six burglaries.

Jailing him for three years him at York Crown Court, Recorder Deborah Sherwin said: "Your purpose for travelling to England was to carry out this spree of theft.

"You travelled around the country visiting stately homes and stealing from them. It was pre-planned, you took advantage of these vulnerable homes that do not have the most sophisticated security measures in operation."

Prosecuting, David Brooke, said: "The two men visited a number of stately homes between July 30 and August 3 last year. But they were not innocent tourists visiting them for their beauty, this was a long weekend of crime."

Defending, Taryn Turner, said that Shannon had been claiming disability benefits after being seriously injured in a car crash in 1996. As a result he had suffered four heart attacks.

Speaking after the sentencing, Sgt Daniel Spence, of Malton Police Station, said: "Shannon is a prolific international travelling criminal with numerous convictions of a similar nature and his visit to the UK was with the sole intention of stealing works of art from stately homes and country houses.

"An accomplice in this case was detained by the Gardai in Dublin and has been dealt with in Ireland for handling stolen goods. The Crime Prosecution Service and the police are working towards attaining an arrest warrant and bringing him back to the UK."

He added: "It is a good result for Castle Howard and the police."

Up in court again in Dublin for putting his hand through a Monet.
http://www.independent.ie/irish-news/courts/damage-not-deliberate-says-man-who-ripped-10m-monet-29783412.html