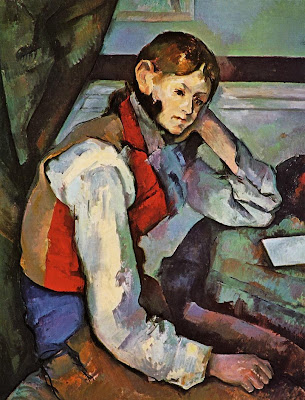 Stolen Cezanne handed over to Switzerland

BELGRADE, Serbia — A Serbian police chief says a stolen Paul Cezanne painting worth million ($130 million) has been handed back to Switzerland.

The masterpiece by the famous French impressionist, titled "The Boy in the Red Vest," was discovered in Belgrade on April 12 after police arrested four Serbs suspected of robbing the E. G. Buhrle Collection in Zurich on Feb. 10, 2008.

Serbian Interior Minister Ivica Dacic said the painting was flown Monday to Switzerland on a special flight. He says "(I) hope they guard it well" from now on.

The robbery was among the biggest art thefts in Europe in recent history.

The suspects were caught as they were trying to sell the painting to a Serb for a reported euros 5 million ($4.6 million).
Posted by Art Hostage at 9:22 pm

I wonder whether Dick Ellis was involved in this recovery