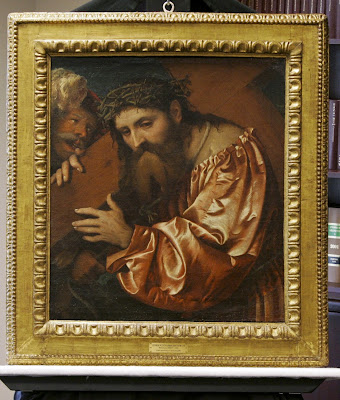 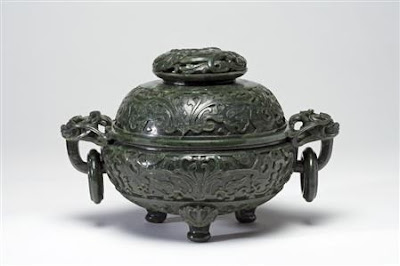 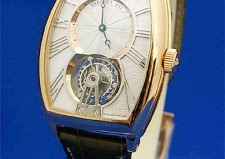 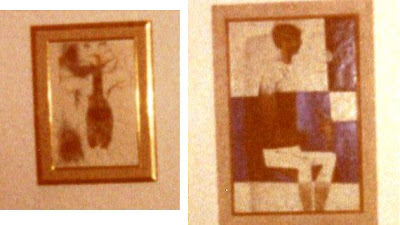 Taxi drivers are being asked for help to find thieves who stole Chinese works of art worth millions of pounds from the Fitzwilliam Museum in Cambridge.

The 18 items stolen, thought to be worth at least £18m, were mostly jade and part of the university museum's permanent collection.

Detectives believe the burglars entered through the back of the building at about 19:30 BST on 13 April.

They want taxi drivers who may have been in the area to come forward.

Det Ch Supt Karen Daber said anniversary checks on Friday, a week on from the theft, show taxi drivers use the back of the museum and side streets as a turning point.

"I would ask taxi drivers to cast their minds back and think about whether they saw or heard anything unusual or suspicious in that area," she said.

"We are keen to hear from any taxi drivers who may have dropped people off in the area of the Fitzwilliam Museum between 18:00 and 20:00 BST on Friday, 13 April, particularly if they used side streets to turn around."

It is thought a group of up to four people were involved in the theft.

Officers believe they were inside the building for a "matter of minutes" before fleeing in a getaway car.

CCTV from local car parks and park-and-ride facilities is also being checked as part of the inquiry.

A team of 25 officers and staff are working on the investigation, called Operation Tundra, to trace the stolen items.

"This is an exceptional crime and this investigation remains a top priority for the force," Det Ch Supt Daber said.

Untrained guards, faulty equipment and disastrous communications made Athens' National Gallery vulnerable to a January art heist that saw it lose a Picasso and other works, a report said Friday.

The museum "did not fulfill the security conditions needed to protect the institution," the public service inspector general's office said in the report.

The document traces an almost farcical trail of security breakdowns leading to the burglary in the early hours of January 9 of Picasso's 1939 oil-on-canvas "Woman's Head", which the Spanish master had given the Greek state in 1949 as a tribute to the country's resistance of Nazi Germany.

The other stolen works were a 1905 oil painting by Dutch abstract artist Piet Mondrian and a sketch by 16th-century Italian artist Guglielmo Caccia, better known as Moncalvo.

The National Gallery was an ideal target, the report said, because museum security had not been upgraded since 2000.

Several areas in the museum were out of range of security cameras -- and even if the cameras had caught the whole burglary, their tapes had not been changed because there was no money for new ones.

The museum's alarms were also faulty and prone to ringing gratuitously, the report said, blaming dead or absent batteries.

The night of the heist, the burglar or burglars repeatedly set off an alarm by manipulating an unlocked door, diverting security before sneaking into the building.

The guards had to use their cell phones to communicate because they had no radios. And they had not received any job-specific training.

The report said security had been improved since the heist.

The gallery was on reduced security staffing at the time owing to a three-day strike.

The sole guard told police a burglar alarm went off shortly before 5:00 am, and that he saw the silhouette of a person running from the building.

He said he ran after the thief, who dropped another Mondrian oil painting.

The break-in lasted only around seven minutes.

Authorities did not specify the value of the stolen works, but Skai television said they were worth about 5.5 million euros ($7.3 million).

The back of the Picasso painting, a cubist portrait, reads in French: "For the Greek people, a tribute by Picasso."

The gallery in the centre of the Greek capital has a vast permanent collection of post-Byzantine Greek art, as well as a small collection of Renaissance works and some El Greco paintings.

Police are searching for a gang of thieves who approached a stranger to shake his hand - before stealing his £100,000 watch from his wrist.

The 40-year-old victim was approached by the group of three or four men in Berkeley Street, Mayfair, central London, at about 2.25am on Saturday, April 14, Scotland Yard said.

The men, described as dark skinned Eastern Europeans aged in their mid 20s, shook the victim's hand before one of the suspects managed to remove the watch from his wrist and ran off towards Berkeley Square, Mayfair.

The Breguet Tourbillon watch is one of only 60 in existence and has a rose gold rectangular face and a black crocodile skin strap, with the inscription 'Limited Edition 819AK' on the back.

Police said no one had been arrested following the incident, which is being investigated by officers from the Westminster robbery squad.

A 474-year-old painting stolen by Nazis during World War II has been returned to the heirs of its Paris-based Italian Jewish owner.

Christ Carrying the Cross Dragged By A Rascal by Girolamo de Romani was one of 70 items stolen from the collection of Frederico Gentili di Giuseppe.

US officials confiscated the work in November as a 15-year effort to return the painting came to a head.

Gentili died of natural causes in 1940, a month before the invasion of France.

His collection was sold by the Vichy French government in 1941.

"Thanks to the tireless efforts of those involved, we are now righting a wrong perpetrated more than 70 years ago," Susan McCormick, a special agent with US Homeland Security investigations told reporters.

"Seventy years is a very long time. But it shows that it is never too late to right a wrong."

The painting was one of 50 works on loan to a museum in Tallahassee, Florida from the Pinacoteca di Brera Museum in Milan, Italy. The Italian museum had purchased the work in 1998.

An employee at Christie's auction house tipped off Interpol investigators last June that the painting may have been stolen.

Gentili's grandchildren filed a suit in 1997 to get his art collection back. A few years later, the Louvre Museum in Paris returned five paintings belonging to the collector to his family.

The paintings are among the estimated hundreds of thousands of works stolen from Jewish families by the Nazis.

Homeland Security officials have repatriated almost 2,500 works to 23 countries since 2007.

"For a cake, it is relatively easy cutting it into six, not totally easy but quite easily," Lionel Salem, one of the heirs, told the Reuters news agency. "But for a painting, you see, it is more difficult."

A photo of the print taken appears above, along with a photo of an untitled oil painting by Giuseppe Guerreschi that was taken from the victim's residence.

The victim describes the oil painting as an painting of a young man’s profile. He has a missing a hand and in place of his hand is a “rod” or stick like object.

Sitting on the rod is a bird. The bird can be located in the middle to lower section of the right side of the picture, although it is hard to see in the family photo. There are blue and cream colors throughout the painting in addition to some other colors.