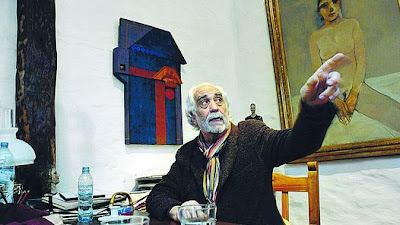 20 Works Of Art Stolen From Home Of Painter Carlos Alonso

She was with her family. They were beaten and threatened for two hours. The band wore gloves and handies. They took works of other artists, but none of the victim. The haul would be around $ 250,000. Carlos Alonso was assaulted by 5 masked

"I just join a huge community: those harassed, robbed and fondled that in our country, unfortunately is a growing community" Clarin said yesterday, with great sadness, Carlos Alonso, one of the most important living painters of Argentina who, on Tuesday night, was beaten and psychologically tortured with her family, at his home in Unquillo, 35 miles northwest of the city of Cordoba.

In a commando-style assault, five masked robbers, wearing gloves, weapons and communication handies, took twenty works of art from the artist's private collection, among which include a drawing of Enea Spilimbergo Lino, who was his teacher and Alonso, who chose to live in Unquillo; valuable works by Antonio Berni, Enrique Policastro, Pedro Pont Vergés and a lithograph of Edvard Munch, Norwegian author of "The Scream", among others.

But, strangely, did not steal anything from the victim.At one point raised a picture of the artist, but backtracked on an order received by handy. Considered a major gallery for Clarín that "the spoils to the $ 250,000 amount."

"We gave all the impression that it was a theft to order. Just joined, one of them pointed a gun at his head and said, 'We came to Buenos Aires for you. We know who you are. Tell us where the Spilimbergo '. "

The two hours of terror for Alonso began about nine o'clock at night. The teacher had dinner with Teresa, his wife, Ludovico, one of his sons and a friend of his. Paul, the son who lives in the family house, was returning from a trip.

"It seems that some jumped the perimeter fence, the property has 5 acres on a hill in the heart of Unquillo-entered the house of home and waited for someone to come out for the rest of the group from entering a pickup truck, rebuilt Paul before Clarín.

Alonso himself continued the story: "Going to Ludovico, who had just fired, and held at gunpoint.

We threw on the floor of living upside down.

We tied up and threatened us shouting. Buenos Aires and Cordoba hear tunes, so we thought it was a mixed band. Then took me to my study, which was the Spilimbergo.

I was tied to a chair and began to stack boxes like bricks, "he told the artist.

So neglected was that I complained when they broke the glass of Spilimbergo o: could have damaged it is a portrait on paper that made a girl from a nearby town who was the daughter of German and his name was Marlene Dietrich. "

The robbers were asking for each frame Alonso taking and its value.

Do you hit?Yes, I was punched in the head to tell them where was the silver. That violence was rising. I took where we had about $ 3 000 and 2 000 pesos. They were taken, of course.

Then he was blindfolded with a scarf, "I said, 'Old Man, go to find the medicine because you carry with us." And then, "Or do you prefer us to get your son?".

- What did you do then?(Alonso has a daughter disappeared during the military dictatorship).

In those moments of terror one only thinks in life. Teresa that flutter, that my child is not removed, that the types do not lead us, not to shoot ...

The band stirred every room in the big house: to put upside down the bed. Suddenly, "the less he spoke, it seemed the head and knew something about art, said 'we go'. They went out all at once. They took my son's car (a Peugeot 307 which was abandoned the next morning in the neighborhood of Villa Adela de Córdoba), and also heard the sound of a truck. "

According to Alonso, "all these works are not easy to sell, except to collectors. I clarify that I am not. All exchanges are fruits and gifts of colleagues, teachers and friends. "

Do you suspect someone?We suspect some people who visited the house, some antique, someone who came to offer some wood carving ...

Overwhelmed, but wielding the subtle humor that at 82 years has not lost, the artist was fired with an irony: "No, not steal any of my works, which certainly is disappointing."