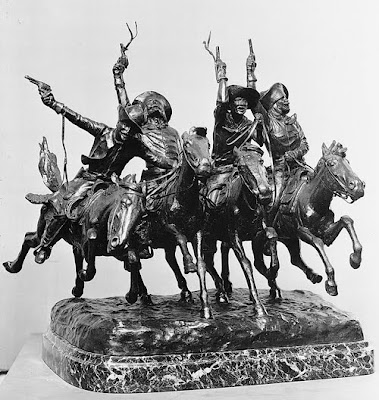 OGDENSBURG, NY (ACNI) - Auction Central News has just been notified by the curator of the Frederic Remington Art Museum that the one-carat Tiffany & Co. diamond engagement ring discovered missing from their collection on June 6 has been recovered.

"We were elated to learn that the ring has been found thanks to the diligence of the Ogdensburg Police Department’s Detective Sergeant Harry McCarthy who moved quickly to secure its recovery and a confession," said Curator Laura A. Foster. "While the ring is not extremely valuable as a generic 19th-century artifact, it is invaluable to the museum as a memento of the Remington legacy."

The ring had been given by American artist Frederic Remington to his fiancée Eva Caten more than a century ago. The couple wed on Oct. 1, 1884.

"At the museum we were heartbroken when the ring went missing, and our deepest thanks goes out to the Ogdensburg Police for its quick action," said Foster.

The Frederic Remington Art Museum is located at 303 Washington Street, Ogdensburg, NY 13669. The museum is dedicated to collecting, exhibiting, preserving and interpreting the art and archives of Frederic Remington, and contains an unmatched collection of his works. The museum is open May 15-Oct. 15, Monday-Saturday, 10 am to 5 pm; and Sunday, 1 to 5 pm . From Oct. 16-May 14, the museum is open Wednesday-Saturday, 11 am to 5 pm; and Sunday, 1 to 5 pm.

1902 Coming Through the Rye

This 1902 bronze was described by the artist as “four cowboys on running horses…men shooting pistols and shouting.” In selecting the subject of his eighth bronze, Remington revisited an image he had twice earlier depicted in an illustration published in Century Magazine and several others around that time. The illustration vividly depicted recklessly spirited cowhands coming into town for a weekend of revel rousing and fun.
This was a fine example of a three dimensional study of western sculpture. Remington’s technical virtuoso was truly demonstrated in this piece more than any to date, with only six of the sixteen hooves touching the ground. This may not have always been Remington’s idea to have six of the hooves on the ground, as in an original picture of the base sketch it appeared that Remington had intended to have five hooves down and eleven in the air. Later Remington wrote the founder Riccardo Bertelli and told of the changes that were made. The casting of this piece was closely overseen by Remington, (later related by people in the workshop) this was common for his larger pieces. The sculptures numbered nine through fifteen were weaker in appearance than that of previous pieces. Also, though careful examination, experts have noticed that the signature on number nine is uncharacteristically sharper than its predecessors, indicating the piece had been re-worked, strengthened and made without a foundry marking. This may indicate that any piece after that number was produced by artisans at the foundry.
To Remington’s delight this piece was one of the only two purchased in the entire 1905 by the Corcoran Gallery of Art in Washington D.C. Not surprisingly, this sculpture has remained one of the most popular and sought after pieces to date, both in the eyes of the public and private collectors alike.

OGDENSBURG — The man accused of stealing an antique gold ring from the Frederic Remington Art Museum last month tried twice to return it before he was arrested on Monday, according to Edward A. LaVarnway, museum executive director.

Blake R. Peabody, 24, of 814 S. Water St., a former part-time maintenance employee at the 303 Washington St. museum, allegedly stole the single-carat, 19th-century ring May 27. On two occasions a week later, while at work June 2 and 3, he attempted to put it back in the same glass display case from which it was removed, Mr. LaVarnway said.

Mr. LaVarnway said Tuesday that Mr. Peabody told him of his attempts to return the ring and his motivation for doing so.


"He told me after he took the ring that he'd made a big mistake," Mr. LaVarnway said. "He was very remorseful."

The ring was reported missing June 6. The next day, Mr. Peabody was fired from his St. Lawrence County Department of Social Services Workfare program-arranged job after working at the museum for a month. Mr. LaVarnway said the dismissal was for missing too many days of work, not suspicion over the stolen ring.

Why Mr. Peabody was unable to put the ring back into the display case may have been a matter of ill timing. His working hours were 9 a.m. to 2 p.m. and, according to Mr. LaVarnway, one of his chores was cleaning the display cases.

The ring was recovered at Mr. Peabody's home Friday when Ogdensburg police went there, and he confessed to taking it. But more time passed until he was charged because Laura A. Foster, museum curator, was not available to officially identify the ring until Monday morning. Mr. Peabody was arrested an hour after its identity was confirmed.

Mr. LaVarnway said Tuesday that Ogdensburg Police Detective Sgt. Harry J. McCarthy brought the ring to him at the museum Friday. But, without the benefit of a file photograph of it for verification, the executive director was uncomfortable about making a positive identification.

"I couldn't officially identify it," Mr. LaVarnway said. "We needed a curator to do that."

Mr. McCarthy said Tuesday that no arrest was possible until the ring was officially identified. He also said police didn't believe Mr. Peabody was a flight risk.

"He was cooperative," Mr. McCarthy said. "He has three small kids."

On Monday, Mr. Peabody pleaded not guilty in City Court before Judge William R. Small and was released to the supervision of probation. He will be back in court June 21 and will be represented by the St. Lawrence County public defender's office.

Police have the ring and will return it to the museum after Mr. Peabody's legal counsel with the public defender's office has an opportunity to have it appraised. Police have given it a minimum retail value of $2,200. The museum regards it as invaluable because of its having been purchased in 1884 by the late sculptor and illustrator Frederic S. Remington as an engagement ring for his wife, Eva.
Posted by Art Hostage at 11:27 pm