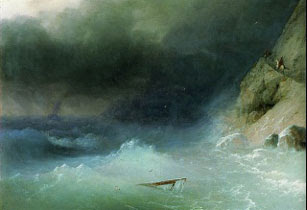 Ayvazovsky's stolen canvas back to Armenia

A stolen canvas by world-famous marine painter Hovhannes Ayvazovsky has been returned to Armenia.

The Storm at Rocky Coast which was earlier flown to Zvartnots International airport has been officially handed to the Armenian National Art Gallery which hosted today a presentation ceremony on this memorable occasion.

The canvas was stolen from the Armenian Society for Cultural Relations about twenty years ago. Earlier this year, it was offered for sale at a Moscow auction house. A Russian based ethnic Armenian senator, Hovhannes Ohanyan, was the last owner of the sea paining.

"Perhaps it was predetermined in heaven that I was to become the owner of this canvas," the senator told reporters at the National Art Gallery.

He said it was difficult for him to part with the canvas that decorated his private collection for several years.

Ohanyan purchased the canvas from a prominent Russian family about seven years ago.

"I don't want to give the family's name for well known reasons," he said. "I had no doubt that the person who stole it could have had a dark past."

The collector said he always contacts the Interpol before purchasing a canvas to find out whether the item on sale is not in the wanted list.

A Russian Federal Service monitoring the implementation of laws on the maintenance of cultural heritage has assisted in the transportation of the canvas to Armenia. The head of the service, Victor Petrakov, who is also in Armenia, was surprised to note that a stolen artifact was being returned to its source country with their agency's assistance.

"We normally engage in finding and returning stolen artifacts to Russia," he said, expressing astonishment with the activeness of Armenians.

Minister of Culture Hasmik Poghosyan, who worked in the Society for Cultural Relations in 1990, recalled that the canvass had been stolen in a period when the building was under repairs.

Director of the National Art Gallery Paravon Mirzoyan compared the event with the "Return of the Prodigal Son."

No information on the canvas thieves is available for the time being.