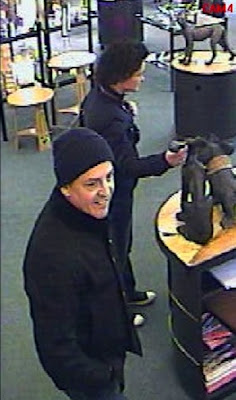 The thief struck twice over a three-year period and was only prevented from stealing the last time after staff recognised him and he fled.

Ulverston Sergeant Sara Seath will be talking to Rav Wilding on the new Crimewatch Roadshow at 9.15am next Thursday as they appeal for help from UK viewers to trace the culprit.

During the BBC1 show, CCTV footage will be shown of a man police would like to speak to in connection with the thefts – which have a combined value of £4,100 – from the Old Courthouse Gallery.

Sgt Seath explained how the first incident took place in May 2008, when a man entered the gallery with the appearance of being a genuine customer.

He went upstairs and removed the sculpture from the display, before leaving the premises.

The bronze sculpture is by British-based artist Peter Beard and is worth at least £1,500.

Despite extensive enquiries at the time with CCTV footage, no suspect was identified.

On March 17 this year the same man entered the galley in the company of a female.

They again gave the appearance of being genuine customers, and engaged the shop assistant in conversation.

When the assistant was distracted by another customer, the man removed another bronze sculpture by the same artist, valued at £2,600, and placed it in the female’s bag.

Both then left the store.

The male is described as being in his 40s to 50s and white. He was wearing a dark-coloured jacket, blue denim jeans and a navy beanie hat.

The woman was described as slim, 30 to 35 years old, wearing a dark-coloured jacket, blue denim jeans and black Converse shoes.

On Sunday May 8 at 3.55pm, the man again went into the gallery, but quickly left when he realised staff in the gallery had recognised him.

Despite police attending the scene quickly, the man was not found in the area.

Mangeress of the Market Place gallery, Malgosia Michalska, said: “The incident in March happened on the main floor of the gallery.

“The sculpture was stolen from a high window shelf. There were two person involved, male and a female.

“The male lifted the sculpture down and placed it into a shoulder bag belonging to the female.

“After the theft, they both chatted with the member of staff for a little while, trying to distract her and the colleague downstairs of noticing the theft immediately.”

Sgt Seath, who is heading up the investigation, said: “Despite circulating the image to local shops and galleries within the local area, the suspects haven’t been identified, which leads us to believe that the offenders may be from outside of Cumbria.

“The male suspect has clearly targeted the premises on two occasions three years apart, and has had a further likely attempt thwarted due to the staff recognising him.