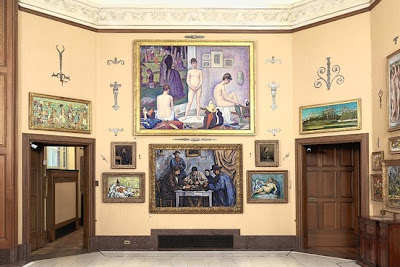 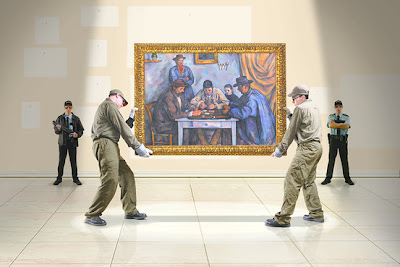 How do you transport priceless art? As Philadelphia's Barnes Foundation begins a controversial relocation, it confronts a question that has long tantalized thieves and challenged security experts.

Chances are, absolutely nothing will go wrong when the Barnes Foundation closes its doors on July 3 and begins the process of transporting its art collection to a new building down the street from the Philadelphia Museum of Art, next to the Rodin Museum. After all, the hard part is over, the near-decade of court filings seeking to enable, or prevent, the move of a collection estimated in some quarters to be worth as much as $25 billion. What's left is a six-mile trip, normally a 20-minute drive from the Barnes's quiet longtime home in suburban Merion, Pa., to the new location, slated to open next May.

Still, if history is any guide, this is not an operation to be taken lightly. The museum's collection could be among the most valuable physical assets relocated in American history, rolling down Philadelphia's ulcer-inducing Schuylkill Expressway, or via shortcuts through sketchy Fairmount Park. Combative chemist Albert Barnes accumulated perhaps the greatest Impressionist and post-Impressionist art collection in the world: 181 paintings by Pierre-Auguste Renoir, 69 by Paul Cézanne, 59 of Henri Matisse and more. The works to be moved include Cézanne's "Bathers," Georges Seurat's "Models," Vincent Van Gogh's "Postman" and the spectacular mural "The Dance II," which Dr. Barnes commissioned Matisse to create for the space being vacated. There are five versions of Cézanne's much-revered "The Card Players" in the world; the one hanging at the Barnes is the biggest, and many think the best. About 4,200 works will be moved, at undisclosed departure times between July and next spring.

"I can't say that I can recall any time in history where such a large amount of high-value, world famous artwork has been moved from one place to another," says Paul Hendry, a self-described former stolen-art trafficker who now consults and blogs about art crime from outside of London. "The only equivalent I can give you would be during the Second World War, when governments would empty their museums and store them."

So how do you move many billions of dollars in art through Philadelphia?

No, really…how? Do you do it quietly or loudly? All at once, or in many small trips?

"We're basically not talking about logistics, for all the obvious reasons," says Derek Gillman, the Barnes's executive director.

It's likely that the Federal Bureau of Investigation and Philadelphia police will be involved, though the FBI officially refused to comment and the Philly police department says it has no specific plans yet.

For decades, the Barnes saga has been the Philadelphia story with everything: art, money, politics, race, sex (the place is filled with nudes). Dr. Barnes, who grew up in a working-class Philadelphia neighborhood and made his fortune selling the anti-gonorrheal compound argyrol in the early 1900s, used his wealth to accumulate works by the giants of Impressionism and post-Impressionsm before they were stars.

Never cozy with the art establishment—the highbrows at first didn't like his taste—he became an anti-snobbery snob, building a mansion just outside the city's border that opened in 1925 to exhibit the works not as a museum but as a school, teaching his own art theory and favoring working-class customers. Dr. Barnes allowed public access, but when the rich and famous asked for a peek he was happy to snub them. T.S. Eliot, after lecturing nearby, was turned away. Writer James Michener claimed to be a steelworker to get in. Legal documents forming the foundation placed limits on weekly attendance and hours. Over the years they were loosened but not removed. Main Line neighbors complained about tour buses.

Ultimately, the restrictions became a lever in the argument by powerful patrons of Philadelphia arts, who began financing a complicated legal battle in 2002 by claiming the foundation was nearly bankrupt and could be saved only by scrapping Barnes's rules and raising money to move to a new gallery downtown. A core of diehard former Barnes students battled to prevent the move, and some art lovers have mourned the loss of a singular venue where the setting has been as much a part of the experience as the masterpieces. In 2004, a state judge ruled that the Barnes foundation could relocate. Appeals dragged on, but to no avail.

It used to be in fashion to transfer high-profile art conspicuously, with visible police escorts, but these days it's more hush-hush, says Noah Charney, founder of the Association for Research into Crimes against Art, who is teaching a masters course in Italy this summer on the history of art crime.

"The security directors with whom I work don't want anyone to know what is moving when. It's all very cloak-and-dagger," he says. "They have been known to use double-bluffs—multiple armored trucks with only one carrying any art. The trucks have their own anti-hijack security systems, just as they would carrying cash or gold, and the art itself is often fitted with RFID [radio frequency identification] tags or GPS tracking devices."

Insurance requirements tend to limit the total value placed in a vehicle. "You don't want to load the truck with 50 Rembrandts and have the driver disappear," says Ron Simoncini, who was security director for New York's Museum of Modern Art when MoMA moved its holdings (including Van Gogh's "Starry Night") to Queens in 2002, then back to renovated Manhattan digs in 2004. That move, like the Barnes transfer, was a short ride through city streets and across a river. Moving everything to Queens took six months, says Ramona Bannayan, MoMA's deputy director for exhibitions and collections. On the way back they made 170 truck trips.

"The goal was to ensure that you have a variety of things moving at any one time," she says. "You're thinking about the size, the materials, the weight, the distribution of artists, you're thinking about value, fragility. That's just what museums do on a regular basis when they move anything. This is just taking it to the next degree."

Escorts often ride with valuable art, usually unarmed. Guards may carry weapons in unmarked follow cars. Ideally you wouldn't move by dark of night, Mr. Simoncini says: "God forbid a truck does go bye-bye. It would be much easier to spot a truck in the daytime with a police helicopter."

Any move like this has multiple points of vulnerability, not just the time on the road. There's the packing, the holding areas, the security of coordinating emails.

"From a criminal's perspective," Mr. Hendry says. "I would say the danger points would be once you've crated things up, and they're ready to be moved in a couple of days, or alternatively once they've reached their location before they're hung."

There's also risk of noncriminal loss or damage. In the mid-1990s, the Barnes sent 83 of its prominent works on a fund-raising tour to museums in Tokyo, Paris, Washington, Philadelphia, Toronto and Austin, Texas. Nothing was stolen, but "there was a lot of minor damage, little bits of gilt, plaster from the frames," says Nicholas Tinari. A former Barnes student, he is founder of the Barnes Watch website and opposed the move.

Like other critics of the move, he saw it as a grab by Philadelphia commercial interests to promote tourism. A 2010 documentary, "The Art of the Steal," highlighted this view. Quirky as the Barnes was, art critics loved it. Matisse called it the only sane place in America to view art. In one intimate room after another, paintings hang nearly floor to ceiling on walls covered with burlap, close enough to breathe on and seemingly without order: European masterpieces next to African sculpture and ornamental metal door hinges. Barnes arranged ensembles to show influences and similarities in the use of lines, light, color and space.

When it reopens next year, the Merion mansion will remain held by the foundation but largely empty, surrounded by a small, gated arboretum that's also part of the school. In June, at a farewell open house for friendly neighbors, Barnes executives put out a suggestion box seeking ideas for how to put the building to use. The second floor at Merion already has been closed to the public for months, used as a space to prepare art for the move.

The $25 billion is the most common estimate. "I wish people would stop using that number," says Mr. Gillman of the Barnes Collection. The fact is, nobody knows. Priceless is priceless. The FBI estimates that art crime is responsible for $6 billion in losses annually world-wide.

Robert K. Wittman, former head of the FBI's Art Crime team and now a security consultant in Philadelphia, notes that history's most infamous art thefts, including the 1990 Isabella Steward Gardner Museum heist in Boston, targeted works hanging on walls, not in transit. But he adds that art on the move is at its most vulnerable.

Mr. Wittman helped recover a 1778 Goya masterpiece stolen off a truck in Pennsylvania in 2006 en route from the Toledo Museum of Art in Ohio to the Guggenheim in New York. In that case, its two drivers made the dumb decision to check into a motel for a nap. They returned to find their parked truck busted open and the unmarked Goya crate gone. The thief didn't know what he had, and said he wanted to get rid of it. He didn't destroy the painting because "it kind of grew on me." He had a lawyer contact authorities saying he had found it in his basement—there was a $50,000 reward—but wound up pleading guilty and being sentenced to five years in prison.

Though high-profile heists make headlines, most often works are stolen from private residences, commercial galleries or government offices—more frequently crimes of opportunity than "Italian Job"-style capers. Mr. Wittman makes it part of his seminar presentations to debunk the Hollywood image of art crooks as Pierce Brosnans and George Clooneys. His PowerPoint includes a rogue's gallery of actual thieves' ugly mugshots.

"Really famous paintings are impossible to do anything with except sell back to an insurance company," adds Mr. Simoncini. "The idea of the Japanese industrialist sitting in his house with a Van Gogh on the wall behind a screen that he can look at at night is a bunch of baloney."

Profiling is difficult, though, because art crimes usually aren't solved. "At best there's a 10% recovery rate and a 2-to-6% prosecution rate," Mr. Charney says. "Since we criminologists learn mostly from solved cases, there are relatively few cases on which to draw."

It's hoped that this won't be one of them and that the Barnes move will entail only a familiar nightmare—the one that thousands of Philadelphia commuters face daily, on roads that have a way of being a deterrent to all kinds of schemes.

"The worst thing in the world for an art thief," says Nick Tinari, "would be to get stuck in traffic on the Schuylkill Expressway with a Cézanne."