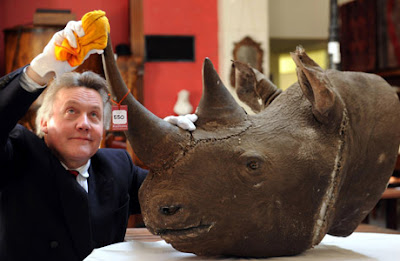 Bidders in battle to buy a rhino head

A STUFFED rhinoceros head caused a bidding war amongst Chinese herbalists at a Northumberland auction house.

The rhino head eventually sold for £35,000 when Alnwick auctioneer Jim Railton put it under the hammer on Saturday.

Mr Railton had been concerned that the sale of the 19th century head – shot by an ancestor of a well-known, titled, local family – could put him on the wrong side of the law again.

Last year he was prosecuted for advertising an antique chest of drawers which contained a collection of birds’ eggs. He was fined for a breach of wildlife laws intended to protect birds, despite the eggs being decades old.

The auctioneer said he fully supports the worldwide ban on hunting rhinos and the labyrinth of laws and measures designed to protect such endangered species from extinction by poachers.

But last week Defra – the Department for Environment, Food and Rural Affairs – gave the sale the all-clear.

Mr Railton explained: “Safari killing sprees carried out by the Victorians, which included this rhino, would certainly not be condoned today, but as a rule of thumb if it can be proved that the animal was killed and the head mounted before 1947 then you can legally sell such trophies.

“There has, however, been growing speculation within the antiques trade over the past few weeks that current legislation is to be tightened up throughout the EU and that had put me on the horns of a dilemma until Defra said the sale was lawful.

“At the sale on Saturday we had several Chinese telephone bidders battling it out.

“There was a lot of curiosity about the stuffed head and people in the saleroom were caught up in the excitement of the telephone bids. The sale went out live on the internet and I have no doubt there was a large Chinese contingent keeping a close eye on just what was happening and what price it fetched.

“No doubt now the horns will now go to make up some wonderful medicinal concoctions that allegedly cure anything from gout to the perfect lift for an aging libido.”

Also under the auctioneer’s hammer was a Victorian painting that has hung in a the dining room of a Northern farmhouse for almost 50 years and which fetched £95,000.

The oil on canvas, which depicts a view of Liverpool docks, was bought for just £100 in the 1960s.

John Atkinson Grimshaw’s atmospheric work shows figures and carriages on the cobbled dock, moored sailing ships in the background and a row of gas-lit shop fronts in the moonlight.

The detail is such that a clock outside one of the shops shows the time at 7pm.

Mr Railton said: “There was a lot of interest in the painting. It just shows people don’t always know the value of what is hanging on their wall.”

BERLIN — Thieves have wrenched the horns off stuffed rhinoceroses in at least five European museums in the past few days, apparently with an eye to grinding up the horns to make an Asian potency remedy.

Police in the German town of Bamberg and the Italian city of Florence disclosed the latest two thefts Thursday.

The horns apparently had a black- market value of tens of thousands of dollars. Trade in horn is illegal under world nature protection treaties. Traditional Chinese medicine credits horn dust with curative powers. Some people also believe the dust is an aphrodisiac.

The Daily Telegraph in London reported a similar theft at the Haslemere Educational Museum in England.

A man has been jailed after he admitted stealing a limited first edition Harry Potter book from an art gallery.

Kevin McGirr, 40, had been charged with the theft of the rare copy of Harry Potter and The Philosopher's Stone.

The book, worth about £6,000, went missing from the Creative Art Gallery in Woodstock, Oxfordshire, in October.

McGirr, of Oxford Road, Kidlington, was jailed for six weeks after changing his plea to guilty at Banbury Magistrates' Court earlier.

The JK Rowling book was found wrapped in a plastic bag outside a Boots store in Abingdon on 15 November.

Harry Potter and the Philosopher's Stone, the first novel in the series, was first published in 1997.

It was later made into a feature film starring Daniel Radcliffe as the young wizard.

POLICE are appealing for witnesses and information after a £10,000 burglary at St Mary’s Church in Radwinter.

Thieves smashed a stained glass window to get into the church in Walden Road between noon on May 9 and 9.30am on May 11.

They stole two oak tables and a chair, two oak chests, several sets of candelabra and other antique items.