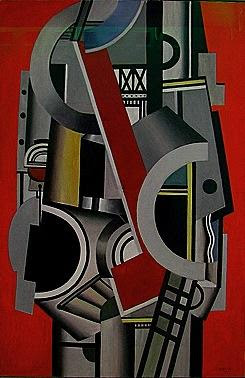 MANHATTAN — An art thief made off with a painting worth a reported $350,000 from the Upper East Side's posh Carlyle Hotel early Tuesday morning.

The Fernand Leger painting, which went missing from the lobby hallway, was on loan from the Helly Nahmad Gallery located inside the hotel's swanky Madison Avenue building.

"The Carlyle's security personnel reported the painting missing at 3:30 a.m. to the 19th Precinct as well as the gallery owner," a hotel spokeswoman said. "A complete investigation is now in process."

A video surveillance shows a man walking into the swanky building then coming out a short time later with a bag not visible in the first clip, the New York Post said.

The 1917 ink-on-linen by Leger — a French artist who was part of the Cubism movement — was apparently only 10-inches-by-8-inches.

The Madison Avenue landmark, a favorite for presidents and prime ministers, boasts of itself as "a showcase great art, a purveyor of privacy and a sanctuary of luxury and refined taste," on its website.

Carlyle art thief gets inn and out

A sticky-fingered art thief strolled through the Upper East Side's famed Carlyle hotel yesterday and walked off with a painting worth $350,000, police sources said.

A worker told authorities that the Fernand Léger ink-on-linen work disappeared between 3 a.m. and 5 a.m. from the hotel's Helly Nahmad Gallery.

Video surveillance shows a man walking into the Madison Avenue hotel, then coming out a short time later with a bag that wasn't seen on the first video clip.

Sources said the crook probably stuffed the 10-inch-by-8-inch painting into a bag. Authorities said the thief got into a car and drove off.

The 1917 work of art, "Composition aux element mecaniques," was painted by Léger, a 20th-century French artist important in the Cubist movement.

There have been no arrests.

Guests walked past white-gloved elevator operators and glanced at the yellow crime-scene tape that clashed with the hotel's ornate decor.

The hotel is known for its discretion, which explained why employees talked about the theft in hushed tones.

"Everybody in the art world already knows that painting's gone," one employee said. "This is horrible."

A detective dusted the area for fingerprints.

"Just because they touch something doesn't mean they leave a print," he said. "With DNA, maybe we'll get lucky."