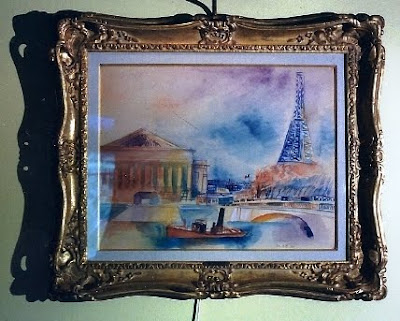 Two Southold Town Police detectives who were the driving force behind cracking a series of art burglaries on the East End were given Top Cop awards by the Police Reserves of Suffolk County earlier this month.

Detectives Joseph Conway, Jr. and Edward Grathwohl began working on the case in late January, when a caretaker for a Southold home reported that $50,000 worth of oil paintings, lithographs and household furnishings were stolen from the property.

Detective Conway, who was on duty when the call came in, was initially assigned to the case, and Detective Grathwohl joined the investigation in April, after an art dealer in Southold whom he knew reported that he had purchased art but later became suspicious of the seller and learned from his contacts in the art world that the works may have been stolen.

After Detective Grathwohl made contact with the art dealer, he and Mr. Conway arranged a phone call and then a meeting in Southold Town between the dealer and the suspect, leading to the arrest of Angel Palencia, 24, of Medford. Mr. Palencia was later indicted on eight felony counts of burglary in the second degree.

The Southold detectives were assisted in their efforts by detectives from Southampton and East Hampton villages and Shelter Island, where other pieces of art were reported stolen, and by investigators from the Suffolk County District Attorney’s office.

“It was definitely their tenacity that brought this to a successful conclusion. It was a combined effort from the beginning, but their detective work ended up bringing it to a head,” said Southold Police Captain Martin Flatley this week of detectives Conway and Grathwohl. “It was not just the arrest, but they stayed with it until they collected as much of the artwork and property as they could. It’s very rare that you can recover that much merchandise.”

After Mr. Palencia’s arrest and confession on April 6, the officers found much of the stolen merchandise at Mr. Palencia’s home, and the next day recovered several other pieces of art at pawn shops in Nassau County. In total, Mr. Palencia is estimated to have stolen about $650,000 worth of art.

Mr. Palencia, an undocumented worker, had worked as a carpenter and a painter on the East End. While he claimed to have been working alone, District Attorney Tom Spota said in April that it was likely he had help gaining access to the houses. There was no sign of forced entry in any of the burglaries, despite the fact that the houses were locked and their alarms were set.

Southold Police Chief Carlisle Cochran nominated the detectives for the awards, which were given out at a dinner sponsored by the Police Reserves, a group of private citizens who support police efforts, on June 1.